Well, the feedback came and we heard it loud and clear: you would have liked more time to try out the skills presented to you by our amazing presenters Nadia and Greg. So tomorrow’s meeting will be devoted to trying out GoodNotes with Google Drive and following Greg’s recipe for an explainer video.

Here is what you will need:

Greg and Nadia will be circulating through the room to help you with any problem you might be facing.

Good luck and see you tomorrow!

Inspired by a comment in Wednesday’s Tech session, I have decided to dedicate Friday’s posts to all things Flipped. This website seems to be the mothership of the Flipped learning method- from resources, to literature reviews, they even have a sign up sheet for Flipeed Classroom open houses where you can attend a flipped classroom in another school or (cough, cough, I am talking to you Mr. Flipped) even host an open Flipped classroom!

Something that might be of interest to English and French teachers is an upcoming webinar in February called Flipped Lit on Tuesday February 25, 5:00 pm. Oh, and yes, they are free!

Check it out and let me know what you think!

First of all, I want to say a big thanks to Greg Scruton, intrepid Math and Multimedia teacher, for giving us a condensed version of his Distinguished Educators Workshop at Mcgill on very short notice. He has graciously given me permission to post the links he used during his presentation which I will annotate for all you poor souls who were not able to attend.
Introduction:
1. Flipping the Class
Greg began by giving us a list of pros and cons for flipping the classroom. A lot of them we have already heard (students can watch videos in their own home where they will be less distracted, they can stop and rewind, replay the video as much as they need, etc.) But he also added “Can’t interact with the teacher” as one of the pros (it was also the only con). He justified putting this in the pro section because it meant that the student couldn’t ask that very urgent question (either valid- in which case it was probably going to be answered anyways if they had just given the teacher a couple of minutes more- or completely invalid-eh. Why do we even need to know this? type of query).
Because Greg requires his students to write notes about the videos and then post them on their individual math blogs, he knows who has watched the video and how much they understand.
He then gave us examples of three different types of videos he makes for his students to watch at home.
2. Video
Examples
1. Screen Capture
2. iPad Capture
3. iPad Live
He noted that there are many ways to create a video, and many tools you can use. Although it feels a bit overwhelming, it is one of those things that seem more complicated when explained than when you actually sit down and do it.
Greg did give us some quick demonstrations of how he creates his magic:
3. Demos
i. Screen Capture
1. Make a Powerpoint
2. Screen Capture Using Quicktime
3. Edit using iMovie
4. Upload to Youtube
ii. iPad Capture
1. Images and GoodNotes
2. Screen Capture using Quicktime and AirPlay (at our school, we all should have quicktime on our devices, but for access to Airplay you need to talk to our IT person).
3. Edit using iMovie
4. Upload to Youtube
iii. iPad Live
1. Record and Edit using iMovie
2. Upload to Youtube
Although Greg is now an expert at the flipping the classroom model and has developed his own methods of creating videos, I want to re-iterate that their are many, many ways to skin a cat – no, sorry. I mean to make a flipped classroom video. I know teachers who record their lessons on a whiteboard app and post the link to their class page. The trick is to play around with several different methods and see which one works for you.
As Greg said, don’t think you are going to get it perfectly the first time. It takes a little practice. Also, ask! That was a lot of information all in one go-don’t be afraid to ask for a one-on-one tutorial.
Thanks again Greg! 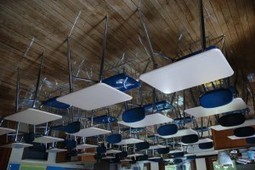 Flipped classrooms are one of the more popular trends we’ve seen since Edudemic was created, and it is certainly one of the most long- lasting.

Check out the hand dandy info graphic – it gives a nice low down on how it helps, and how teachers and students are responding:

The article below made me think of a conversation I had the other day with Mr. Math and Multi media about how it was going with his flipped classroom. He was telling me that since he required the students to take notes on the videos they must watch at home, it has been way more successful. He then took it a step further and not only required his students to take notes, but to post them to their math blogs.

All the students in his class (and now all of you) can benefit from their notes. The fact that they are public I suspect also contributes to the quality. I have made a pinterest board of all their blogs so you can peruse a sampling of their notes, or click on an individual pin to go their blog.

This is a great example of how you can leverage the use of the iPad (or any device) in the class, from watching the videos or presentations on the iPad, to making notes, to posting them on a blog. All this can be done with great ease on one device.

Below is an article on another way one can use the iPad and collaborative tools in order to create a class pool of notes. 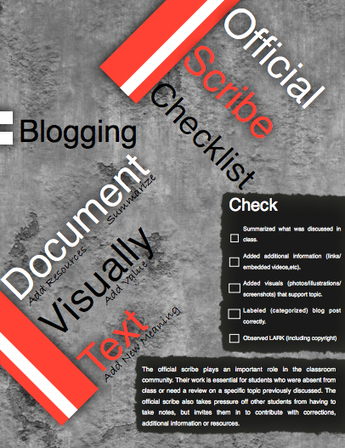 Alan November elevated the “Official Scribe” as one of the roles that empower student learners. I see the role of the scribe as follows: The official scribe plays an important role in the classroom…

Mr. Scruton, our beloved math and multimedia teacher, has made a screen video using two iPads to show his Grade 7 multimedia class how to make a slide show presentation. This is a good example of how the iPad can be useful in a flipped classroom.

Here is what he had to say about how he made it:

Here is the link to a vid that I made by taking a video of one iPad with another iPad. I edited the film in iMovie, then exported. The exported file was way to big (on medium). I opted to jing the playback window from iMovie. There are some minor problems with stops (from the playback of iMovie), but otherwise is ok quality at very low size.

Here are the links:

http://math.trafgirls.org/Math/flashphp/CS1/presentations/KeyNoteiPad/part1.mp4
http://math.trafgirls.org/Math/flashphp/CS1/presentations/KeyNoteiPad/part2.mp4
I assume the Mr. Scruton, when faced with the large file, synced the file to his laptop and then used jing to record the recording.
An alternative route to deal with large files would be to upload them to your youtube page and then share the link with a select group of people. All students at our school have youtube pages attached to their official email- it has been the way we have exported movies from the lab iPads to the teachers. They only have to share the link with their teacher ( a simple click on the privacy options and voilà! An easy way to get a movie off the iPad!