Here is a great article describing a few apps that are compatible with Google Drive and that would be helpful for group projects. I am especially interested in Trello. It looks like it is a nice forum for all aspects of group work and also has a free iPad app (which I have downloaded but not yet looked at). I think I heard the Yearbook teacher mention it- I am going to track her down and ask all about it. Stay Tuned!

I was helping a teacher this morning who was using google drive with her students. The goal was to get the students to upload photos of their artwork to a folder in Google drive so that everybody could have access. The students would then choose one of her peers’ images, download it to her iPad and comment on it, then upload the feedback to the folder. During this process, we were wondering if it wouldn’t be simpler for students to create a google doc, paste the image in it and then add it back to the folder. That way they wouldn’t really have to leave the app.

As soon as we tried to create a new document in Google drive we received this message:

Oh yeah. Separate Google docs app. Okay then. So we downloaded the app and tried to paste an image into it. Nope. Google docs is just as minimal as it was when it was all in one place:

Those features that you see are pretty much all you get. No hyperlinking, no adding images. No fancy formatting.

Still, if you want to create a google doc on your iPad, you will now have to download the new app. Maybe they are planning on making it better? Maybe more features are on their way? I am going to err on the side of optimism here and give them the benefit of the doubt.

Just in case you finally got used to the lay out of Google Drive, Google is switching it up again. They now have separate apps for your documents and your spreadsheets. Apparently a google slides (which I assume is their presentation software) is on its way.

I note that there is no mention of a google forms app, which is what they really need as the forms do not work in the present Google Drive app…

One other note: at the time of the writing of this, I checked the app store to find these apps and was not successful. However I hadn’t installed the last update yet (it is going right now) and the link in the article works and will bring you to the app in the iTunes store. 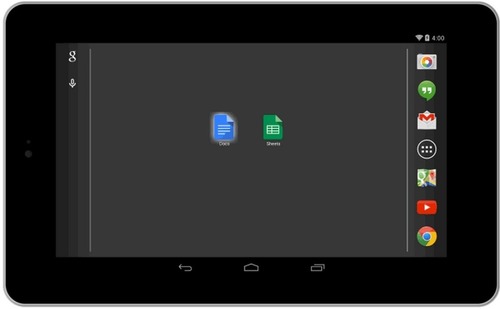 To make up for last week’s April Fool’s, here is a real article about all the amazing things you can do with Google docs via Mary-Kate. I for one, will be referring back to it for a while- after a cursory glance, I am intrigued by the ability to embed presentations as well as use Polyline for drawing. 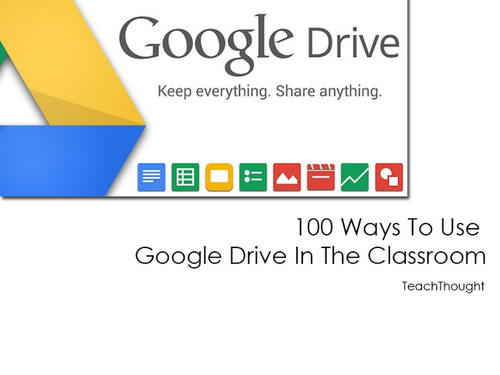 100 Ways To Use Google Drive In The Classroom

For the Traf Reads meeting I decided to use the smart clicker Socrative to quiz the committee and get results in real time, as mentioned in last week’s blog post.

How did it work, Lina? How?

That is a very lame answer, Lina.

I asked them to complete this one question right off the bat. I used all the iPads in the iPad lab, making sure the secretive student app was open and that my “room number” was open on all of them.

This worked out well.

Although I was able to plug in a simple “none” right now, when I was the only one on the network, many of the students’ machines got stuck on the wheel of death.

However, when I used it for a quick poll, it worked way better. I asked the group whether we should start our process over (in spoken words. I know. Old school.) and tapped the multiple choice option. A for Yes, B for No. I was able to get a definitive answer right away:

A little bird also told me that Google docs works better now on the iPad, so I thought I would upload my agenda and use it to make sure everyone was present.

Did it work better, Lina? Did it?

It certainly worked better than before. Before being when it didn’t work at all. So really, anything is an improvement. But I wouldn’t want to have to write a whole document in it.

First of all, there was this annoying bar that kept following me every time I scrolled and would stubbornly not stay in place:

The little magnifying glass doesn’t work, though you can still copy and paste by tapping the screen twice.

I still found it jumpy and lacking much functionality, but I did glimpse a google docs app in the app store for $4.99. Perhaps if you are very gung-ho about googledocs you might want to give it a try and then tell me about it? Anybody?